– Our pilot program to promote cultivation of moringa has started in Baphnom and Preah Sdach districts,  two of the three districts in our overall target area in rural Prey Veng Province.  Most of the farmers in the pilot group are in Preah Sdach where the farms tend to be larger.

–  18 of the 50 farmers in our pilot moringa group are women.  Among those women farmers, the average age is 44 years and the average area cultivated with moringa is 910 square meters.

– One moringa plant requires about one square meter of space.

– The moringa plants require at least three months to mature from planting of the seeds to being ready for the first harvest.

–  So far, in late April and early May, in their first harvest of the new moringa plants, the farmers have harvested 1,233 kilograms of moringa leaves.

– The farmers must start working very early in the morning in order to prune their moringa bushes and collect and deliver the leaves to a central pickup point by about 6:30AM.

– At this early stage of the pilot program, our team is using a pickup truck to transport the leaves to Phnom Penh.  The leaves must be kept cool so they are packed in ice and covered with wet blankets for the two to three hour trip to the city.

– The initial yield per plant has been approximately 0.3 kilograms which matches what our team had projected during planning of the project last year.  As the bushes mature and grow larger, we expect the yield from each pruning to reach 1.5 to 2.0 kilograms per bush.

– The plants can be pruned about once every 30 days.

– The contract for this year calls for our farmers to provide a total of  500kg of leaves per day.  The processor who has contracted to buy our farmers’ moringa harvest believes that, next year, he will be able to increase the contract amount to 1,000 or even 1,500 kilograms per day because he has a new buyer, an NGO in Taiwan which plans to purchase processed moringa products (capsules) and distribute them to the poor in Africa.

– When we started our Rural Assistance Program in early 1999, the target area was a very poor, very hungry place.  Because they had no access to a reliable supply of water, most of the farmers abandoned their fields during the long annual dry season and then worked as laborers on construction sites in Phnom Penh.  For nearly all of our farmers, this moringa cultivation program will provide a steady and significant cash income for the first time in their lives.  We are very excited and hopeful about the opportunity which this program affords us to improve the lives of our farmers and their families.

– Next year we hope to build on the success of this pilot program by extending the moringa cultivation effort to include many more farmers in Baphnom District where the farms tend to be smaller than those in Preah Sdach and where, consequently, the farmers are much poorer. 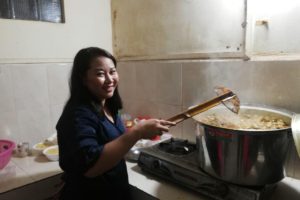 On October 8, head dance teacher, Kanika (pictured below), and[...] 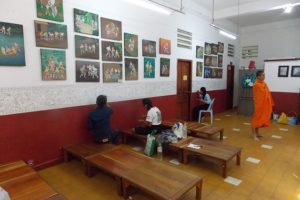 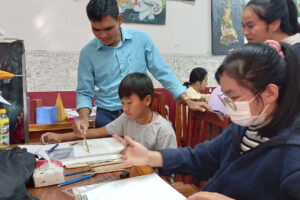 Champey students get busy in the first weeks of 2021